uuencode and uudecode are used to transmit binary files over transmission mediums that do not support other than simple ASCII data.

uuencode reads file (or by default the standard input) and writes an encoded version to the standard output. The encoding uses only printing ASCII characters and includes the mode of the file and the operand name for use by uudecode. If name is / dev/stdout, the result will be written to standard output. By default, the standard UU encoding format will be used. If the option -m is given on the command line, base64 encoding is used instead.

uudecode transforms uuencoded files (or by default, the standard input) into the original form. The resulting file is named name (or outfile if the -o option is given) and will have the mode of the original file except that setuid and execute bits are not retained. If outfile or name is /dev/stdout, the result will be written to standard output. uudecode ignores any leading and trailing lines. The program can automatically decide which of the supported encoding schemes are used.

The following example packages up a source tree, compresses it, uuencodes it, and mails it to a user on another system. When uudecode is run on the target system, the file src_tree.tar.Z will be created, which may then be uncompressed and extracted into the original tree. 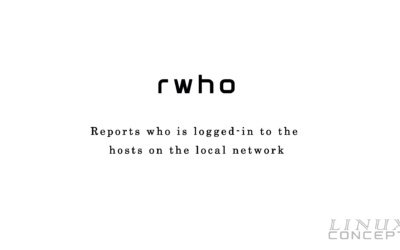 NAME rwho—Output who is logged in on local machines SYNOPSIS rwho -a DESCRIPTION The rwho command produces output similar to who, but for all machines on the local network. If no report has been received from a machine for 11 minutes, then rwho assumes the machine...