Imagine for a second that you’re working for a small company that has three to four KVM hosts, a couple of network-attached storage devices to host their 15 virtual machines, and that you’ve been employed by the company from the very start. So, you’ve seen it all – the company buying some servers, network switches, cables, and storage devices, and you were a part of a small team of people that built that environment. After 2 years of that process, you’re aware of the fact that everything works, it’s simple to maintain, and doesn’t give you an awful lot of grief.

Now, imagine the life of a friend of yours working for a bigger enterprise company that has 400 KVM hosts and close to 2,000 virtual machines to manage, doing the same job as you’re doing in a comfy chair of your office in your small company.

Do you think that your friend can manage his or her environment by using the very same tools that you’re using? XML files for network switch configuration, deploying servers from a bootable USB drive, manually configuring everything, and having the time to do so? Does that seem like a possibility to you?

There are two basic problems in this second situation:

So, what we need is a centralized networking object that can span across multiple hosts and offer configuration consistency. In this context, configuration consistency offers us a huge advantage – every change that we introduce in this type of object will be replicated to all the hosts that are members of this centralized networking object. In other words, what we need is Open vSwitch (OVS). For those who are more versed in VMware-based networking, we can use an approximate metaphor – Open vSwitch is for KVM-based environments similar to what vSphere Distributed Switch is for VMware-based environments.

Now that we’ve listed some of the supported technologies, let’s discuss the way in which Open vSwitch works. 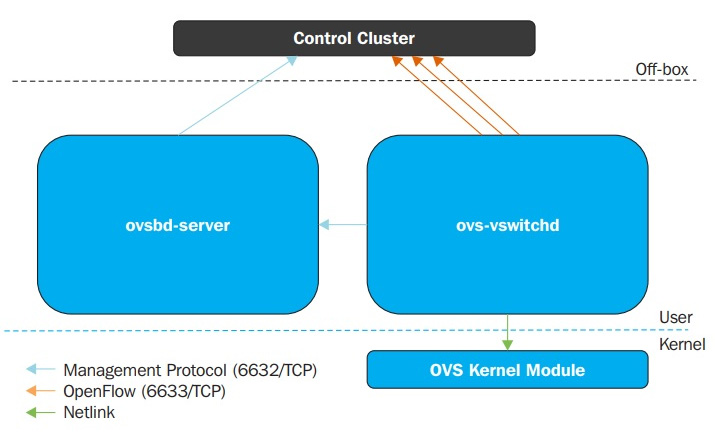 The data path (OVS kernel module) uses the netlink socket to interact with the vswitchd daemon, which implements and manages any number of OVS switches on the local system.

Open vSwitch doesn’t have a specific SDN controller that it uses for management purposes, in a similar fashion to VMware’s vSphere distributed switch and NSX, which have vCenter and various NSX components to manage their capabilities. In OVS, the point is to use someone else’s SDN controller, which then interacts with ovs-vswitchd using the OpenFlow protocol. The ovsdb-server maintains the switch table database and external clients can talk to the ovsdb-server using JSON-RPC; JSON is the data format. The ovsdb database currently contains around 13 tables and this database is persistent across restarts.

Open vSwitch works in two modes: normal and flow mode. This chapter will primarily concentrate on how to bring up a KVM VM connected to Open vSwitch’s bridge in standalone/normal mode and will a give brief introduction to flow mode using the OpenDaylight controller:

Let’s move on to the practical aspect and learn how to install Open vSwitch on CentOS 8:

So, now, we can perform our usual operations when we have a virtual network definition in an XML file, which is to define, start, and autostart the network:

If we left everything as it was when we created our virtual networks, the output from virsh net-list should look something like this:

So, all that’s left now is to hook up a VM to our newly defined OVS-based network called packtovs and we’re home free. Alternatively, we could just create a new one and pre-connect it to that specific interface using the knowledge we gained in Chapter 3, Installing KVM Hypervisor, libvirt, and oVirt. So, let’s issue the following command, which has just two changed parameters (--name and --network):

This command tells us that we’re using the ens256 port as an uplink and that our virtual machine, MasteringKVM03, is using the virtual vnet0 network port. We can apply VLAN tagging to that port by using the following command:

We need to take note of some additional commands related to OVS administration and management since this is done via the CLI. So, here are some commonly used OVS CLI administration commands:

The following examples are the most used options for each of these commands:

Also, you can always use the ovs-vsctl show command to get information about the configuration of your OVS switch:

We are going to come back to the subject of Open vSwitch in Chapter 12, Scaling Out KVM with OpenStack , as we go deeper into our discussion about spanning Open vSwitch across multiple hosts, especially while keeping in mind the fact that we want to be able to span our cloud overlay networks (based on GENEVE, VXLAN, GRE, or similar protocols) across multiple hosts and sites.

Other Open vSwitch use cases

As you might imagine, Open vSwitch isn’t just a handy concept for libvirt or OpenStack – it can be used for a variety of other scenarios as well. Let’s describe one of them as it might be important for people looking into VMware NSX or NSX-T integration.

Let’s just describe a few basic terms and relationships here. VMware’s NSX is an SDN-based technology that can be used for a variety of use cases:

Imagine that you’re working for a service provider – a cloud service provider, an ISP; basically, any type of company that has large networks with a lot of network segmentation. There are loads of service providers using VMware’s vCloud Director to provide cloud services to end users and companies. However, because of market needs, these environments often need to be extended to include AWS (for additional infrastructure growth scenarios via the public cloud) or OpenStack (to create hybrid cloud scenarios). If we didn’t have a possibility to have interoperability between these solutions, there would be no way to use both of these offerings at the same time. But from a networking perspective, the network background for that is NSX or NSX-T (which actually uses Open vSwitch).

It’s been clear for years that the future is all about multi-cloud environments, and these types of integrations will bring in more customers; they will want to take advantage of these options in their cloud service design. Future developments will also most probably include (and already partially include) integration with Docker, Kubernetes, and/or OpenShift to be able to manage containers in the same environment.

There are also some more extreme examples of using hardware – in our example, we are talking about network cards on a PCI Express bus – in a partitioned way. For the time being, our explanation of this concept, called SR-IOV, is going to be limited to network cards, but we will expand on the same concept in Chapter 6, Virtual Display Devices and Protocols, when we start talking about partitioning GPUs for use in virtual machines. So, let’s discuss a practical example of using SR-IOV on an Intel network card that supports it.