If you had the chance to go through Chapter 9, Customizing a Virtual Machine with cloud-init, we discussed a tool called cloud-init. What we used it for was guest operating system customization, specifically for Linux machines. cloud-init is heavily used in Linux-based environments, specifically in Linux-based clouds, to perform initialization and configuration of cloud VMs.

The idea behind cloudbase-init is the same, but it’s aimed at Windows guest operating systems. Its base services start up when we boot a Windows guest operating system instance, as well as read through the configuration information and configure/initialize it. We are going to show a couple of examples of cloudbase-init operations a bit later in this chapter.

What can cloudbase-init do? The list of features is quite long, as cloudbase-init has a modular approach at its core, so it offers many plugins and interpreters, which can be used to further its reach:

Make sure that you check the cloudbase-init documentation for further configuration options as the installer supports additional runtime options. It’s located at https://cloudbase-init.readthedocs.io/en/latest/.

Let’s stick with the GUI installer as it’s simpler to use, especially for a first-time user. First, the installer is going to ask about the license agreement and installation location – just the usual stuff. Then, we’re going to get the following options screen: 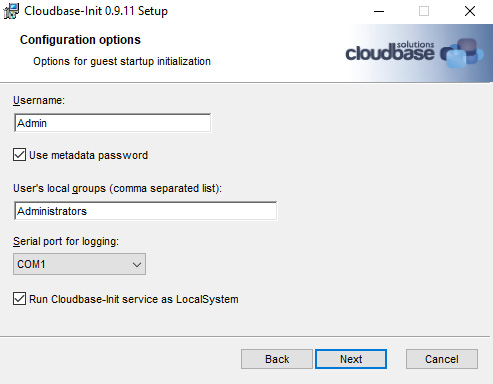 The last configuration screen is going to ask us about running sysprep. Usually, we don’t check the Run sysprep to create a generalized image box here, as we first need to create a cloudbase-init customization file and run sysprep after that. So, leave the following window open: 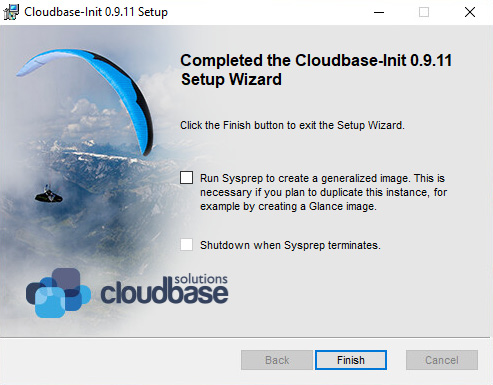 Now that the cloudbase-init services are installed and configured, let’s create a customization file that’s going to configure this VM by using cloudbase-init. Again, make sure that this configuration screen is left open (with the completed setup wizard) so that we can easily start the whole process when we finish creating our cloudbase-init configuration.